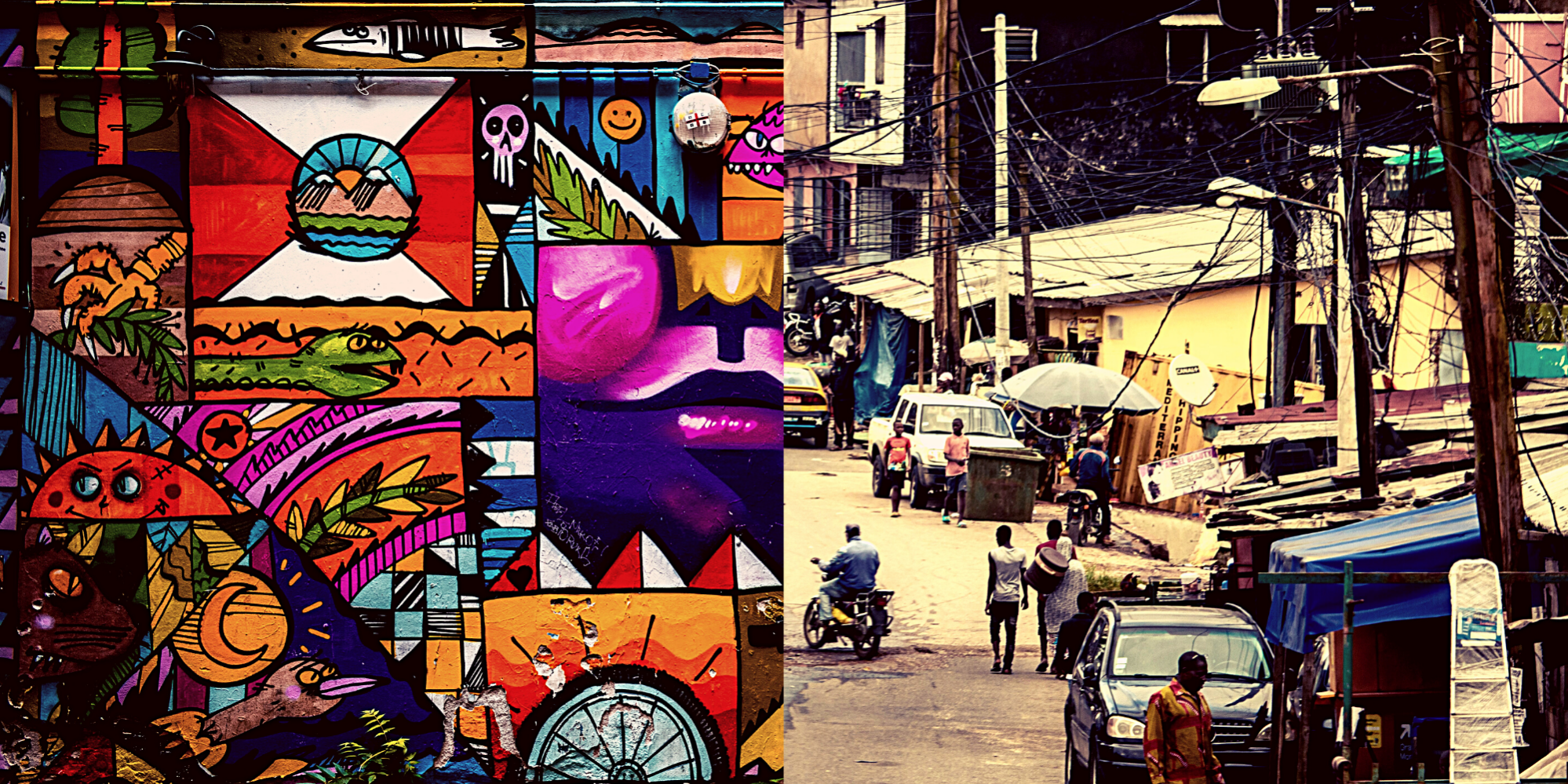 In the last article we talked about migration as a ‘transformational’ experience and art as a tool of liberation, which can be used to understand our own migrational pathways a lot better and work through these journeys, when already in a new ‘home’. This article will again present the work of migrant entrepreneurs in the art domain in Berlin. However, different from last time, it will explore the work of one particular art gallery and its founder, namely Savvy Contemporary and Dr. Bonaventure Soh Bejeng Ndikung. In addition, it will tell a brief tale of Cameroon, Bonaventure Ndikung’s home country and explain why art needs to be showcased respectively experienced in a ‘participatory way’.

Dr. Bonaventure Soh Bejeng Ndikung was born in 1977 in Yaoundé, Cameroon’s capital city, which as the Goethe Institut points out,  lies “in a mountainous area […] surrounded by seven hills”. The name of the city stems from the Ewondo name ‘Ongola’, which Ongola Town has translated as ‘fence’ and linked with “the wall of the former German post office”. The latter reminds that Cameroon was once a German colony, namely in the 19th century from 1884–1916, after which British, French and Belgian troops took over the country dividing it temporarily into ‘French Cameroun’ and ‘British Cameroons’ based on the League of Nations agreements.

With “Germa[n colonizers having] dr[awn] the first map of Cameroon” as Willibroad Dze-Ngwa stated in an article from 2015, it is not surprising how many different languages, ethnicities and cultures the country inhabits. Cameroon is a melting pot. In the UNESCO’s words,  it “‘is an example of diversity to the world’” with a linguistic heritage of more than 240 languages. On 1st January 1960, French Cameroun achieved independence and became the Republic of Cameroon, and on 1st October 1961, part of British Cameroons unified with the Republic of Cameroon, which henceforth turned into the Federal Republic of Cameroon until 1972. 4 million of Cameroon’s 27.8 million population live in Yaoundé, which is about the same population size of Douala, with the latter having been referred to as Cameroon’s economic and industrial capital.

The 1970s-1980s marked a time of various changes in Cameroon. As Cameroon’s Embassy in The United States explains, “[i]n 1972, a new constitution replaced the federation with a unitary state called the United Republic of Cameroon”, which led to tensions between French and English speaking areas of Cameroon as East and West Cameroon became one. Later, in 1975 Paul Biya was appointed as Prime Minister of the United Republic and in 1984, Biya changed the name of Cameroon to La République du Cameroun, which has been perceived as a step towards the marginalization of Cameroon’s Anglophone population as Bang and Balgah state in an article from this year called ‘The ramification of Cameroon’s Anglophone crisis: conceptual analysis of a looming “complex disaster emergency”’.

The ‘Anglophone crisis’, that is Cameroon’s civil war which originally began with peaceful protests in 2016, appears to be a “war of secession” as Foreign Policy writes. As the Deutsche Welle continues, “[s]eparatists in Anglophone regions want their own state, called Ambazonia”. However, while it is easy to blame this conflict on separatists, Bang and Balgah remind that the government’s failure, that is to suppress peaceful demonstrations, also led to the upstream of armed conflict and violence. Especially because the conflict in Cameroon is still ongoing with many Cameroonians struggling with the consequences of poverty and displacement,  art can be one way to document the events that happen as stated on the website of Savvy Contemporary, which showcased the ‘Eye Tok Say…Abakwa Photography’ project in 2020 in an attempt to tell the history of Bamenda, respectively Abakwa town, a city in Northwestern Cameroon amid the conflict.

Whereas Savvy Contemporary supports a diverse pool or artists and various forms of art, it has the mission to unlock the “‘poetic power of artistic practice’” and ‘un-silence lost voices’, which highlights that the practise of art at Savvy Contemporary is informed by an understanding of one’s own privileges and societal ills such as xenophobia, racial violence, economic and class divides etc. As it is stated on the website of Savvy Contemporary, it regards itself as “a space for epistemological diversity” – which might prove some of the viewpoints of Boaventura de Sousa Santos, an Emeritus Professor of Sociology at the University of Coimbra. As Boaventura de Sousa Santos, João Arriscado Nunes and Maria Paula Meneses write in their article ‘Opening Up the Canon of Knowledge and Recognition of Difference’, “there is no global social justice without global cognitive justice”. In simple terms, this means that we have to change perspectives and apply various theories to study the same phenomena before we can draw conclusions.

Another point made in the latter article is that whereas cultural and post-colonial studies have studied multiculturalism through the lens of ‘mobility’ and ‘migration’, this is not sufficient. What should not be overlooked, indeed, is that multiculturalism, and possibly diversity, does not exclude the possibility of differences and commonalities…to portray migrants as an “Other” in Edward Said’s terms simply equates mobility respectively movement with difference and this is a problem based on the imagination that cultures are bound to the boundaries of nation states. Ironically, this viewpoint is also conflicted because of the fact that diversity and multiculturalism are home to nation states. As mentioned before, Cameroon is a very diverse country and so is the city of Bamenda.

The latter has been indirectly illustrated through Savvy Contemporary’s ‘‘Eye Tok Say…Abakwa Photography’ project, which has invited the local population of Bamenda to contribute photographs of their city, surrounding landscapes and diverse cultural traditions amid Cameroon’s civil war about one year before riots broke out in the city. ‘Why photography’ – as Savvy Contemporary writes…because it “ has been a tool of reflection and mediator of certain realities”. However, whereas identities can probably be imagined through photography, photographs also leave room for different interpretations and projections. As such, it might be interesting to know that Savvy Contemporary made an effort to accompany their activist photography project by other events such as a poetry slam and interviews at ABK Radio, a radio channel with a focus on local issues, which served to inform citizens about the photography project. Whereas submitted photographs are hardly available online, this makes sense both with regard to the ongoing conflict as well as the fact that the historical documentation of conflicts and conflict-related art should not be commodities in the hands of other states.

The last point might actually reflect why it is important to support artists from Cameroon and other African countries in Germany today. Historically, Germany has collected a range of artifacts from Africa without rightfully returning them in full. In 2020, it did however return the Tangue, a traditional sculpture from Cameroon, from Munich’s Museum Fünf Kontinente (‘five continents’). Whereas the latter might have sounded hopeful, in 2021 another discussion about the recovery of African treasures arose as the Humboldt Forum in Berlin came into discussion with regard to showcasing the “throne from the Kingdom of Bamum”. While this discussion also included a debate about – whether or not the throne had been a present to the German Kaiser or proof of ‘colonial submission’, what seems more important to mention is that the right to heritage should also be linked with restoring historical rights in the present.

Arguably, Savvy Contemporary symbolically and practically stands for this very act. Allowing African artists to have their own spaces in German society – where their cultures may fuse with and differentiate themselves from aspects of ‘German’ culture, means to create spaces for representation. Hopefully, it will be exactly such spaces that allow us to create more and more awareness about the necessity of claiming historical justice in the present. With the Humboldt Forum having reopened in September 2021 after protestors demanded for the museum to restitute looted artifacts to Africa, it was an African-led organization, namely Berlin Postkolonial e.V., which rightfully criticized this act. If we do not want to allow the same patterns of history to continue, we need to stop acting in the same way as our ancestors did. Holding onto what is not ours and showcasing colonial art without the permission and story-telling of the peoples who were colonized and victimized by European imperialists, means to keep acting like history-telling is a one-sided act.

Aware of our own privileges, we must allow Cameroonians (in this case) to lead such exhibitions and create the stories around them. Savvy Contemporary is such a great initiative because of its leadership, its diverse team, and the principles of performativity and participation – ‘Colonial Neighbours’, Savvy Contemporary’s “participatory archive and research project on Germany’s colonial history” allows room for discussion and this room is much needed to create awareness about racism in society today. As an article from January 2022 by the Deutsche Welle reveals, despite the celebratory act of restituting the Tangue two years ago, two experts in the domain of Cameroonian ‘colonial’ art, were denied entry to Germany supposedly because of lacking birth certificates. What various news outlets claimed instead, was that the failure to allow their entry mirrored ‘institutional racism’. As Deutsche Welle concluded after interviewing Yrine Matchinda and Lucie Mbogni Nankeng, “context is key” – and as such, German-Cameroonian international cooperation needs to focus on recovering the entire ‘wisdom’, which the looted objects inhabit.

The latter task is so important, because when art becomes static – a mere representation of objects decorated with a few one-dimensional facts, it becomes a source of societal division and it loses its capability to tell stories. It is not only Cameroonian, Africa and Asian art, which needs to be showcased differently in German museums – indeed, all forms and objectives of art have unique origins and the latter need to be much more closely investigated. As the American rapper Mos Def said, “African art is functional, it serves a purpose. It’s not dormant. It’s not a means to collect the largest cheering section. It should be a healing, a source of joy. Spreading positive vibrations”…

If you are a black or African founder in Berlin or another German city, we would be particularly pleased to support you on the pathway to business success! Of course also, if you are not a member of this community – because one of our principles is supporting diversity and inclusion through entrepreneurship! Our team is not only specialized across various African jurisdictions, but also in supporting businesses between Germany and Africa in a variety of legal domains. Our support starts with providing help on immigration and relocation matters, but it does not stop there – taxes, tech, intellectual property…You heard us! Find out more about potential synergies today by pitching us your business or expansion idea/plan – we cannot wait to hear from you! If you have a more general inquiry, of course also do not hesitate to write us!