Does Germany Have ‘Sportstech Potential’? 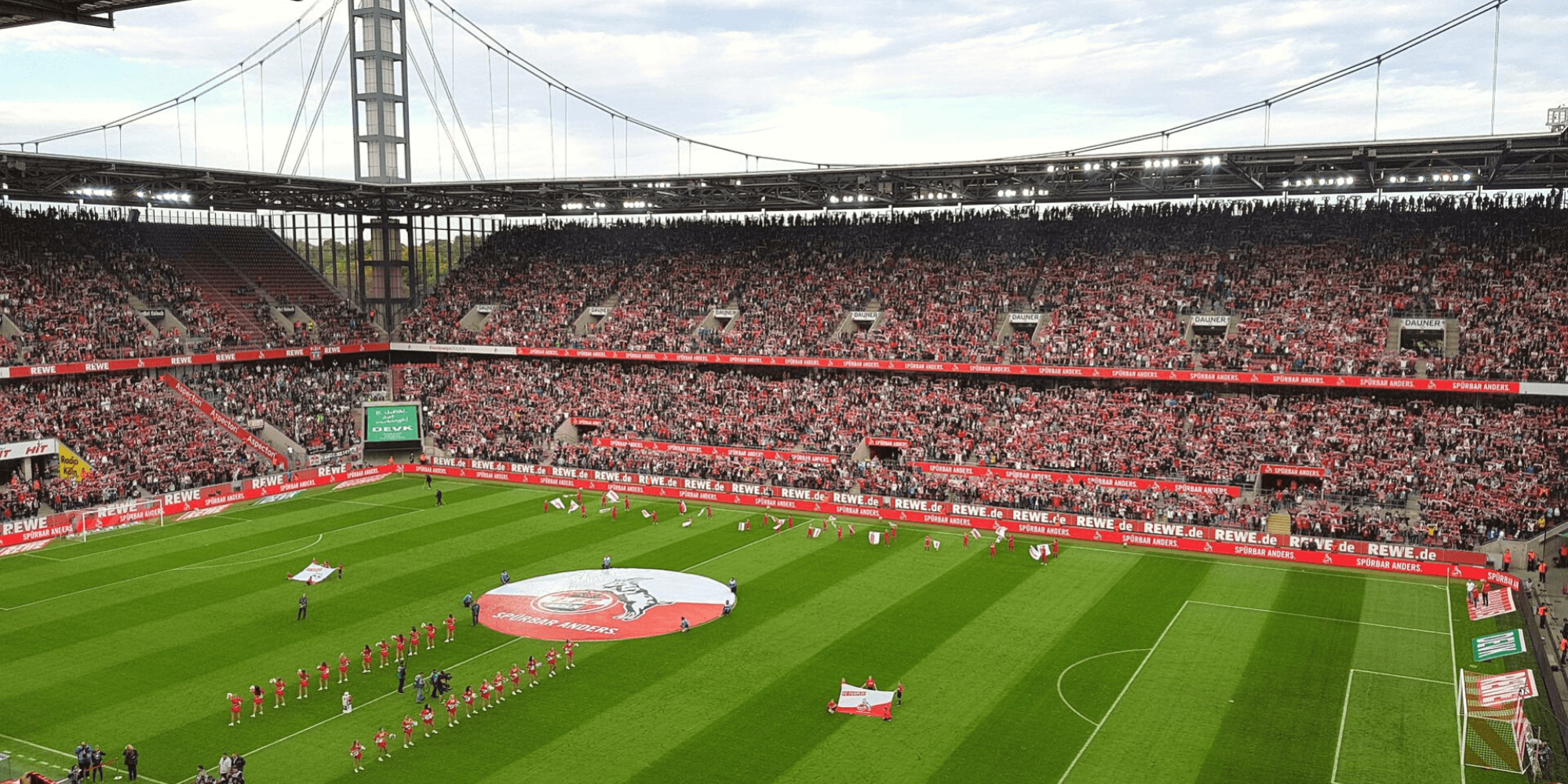 An Evaluation Before The 1. FC Köln VS. AC Milan ‘Innovation Game’

If you are an entrepreneur with an interest in starting up a business in sportstech in Germany, then you might certainly wonder what the ‘football nation’ has to offer in terms of revenue and investors. Whereas Germany’s national football team won the world cup four times in history, namely in 1954, 1974, 1990 and 2014, the football market has been no less affected by the COVID-19 pandemic than other areas of sports and entertainment – at least in 2020 and in 2021. As the Süddeutsche Zeitung wrote last year, German sports clubs lost 800,000 members in 2020 amid the beginning of the COVID-19 crisis. However, sport clubs also used the tragedy of the global pandemic to make a few organizational changes. Find out more below!

For sports clubs in Germany, the COVID-19 pandemic marked both a huge challenge and an opportunity. As the survey ‘Auswirkungen der COVID-19-Pandemie auf die Sportvereine in Deutschland’ (‘The impact of the COVID-19 pandemic on the sports clubs in Germany’) by the Federal Sports Research Institute proves, many German sports clubs have worked on and implemented organizational and strategic changes during the COVID-19 pandemic. More precisely, 46% of German sport clubs have been digitizing their management operations more thoroughly, 42% have established more intense contact with their members, 29% have established financial reserves, 21% have been modernizing their sport facilities and 8% have opted for new ways of funding (i.e. fund-raising). While the latter sounds like change is on the way – there certainly is a lot of room for improvements, especially because these developments constituted a trend with many more sport clubs planning to follow suit.

And the latter is also accompanied by other developments with regard to the digitalization of the sports experience. As was announced by the end of May 2022 on the official website of the German Bundesliga, the German Bundesliga football club 1. FC Köln and Italy’s first division team AC Milan will come together on 16th July 2022 for a special ‘innovation game’. Utilizing the game as a platform to showcase several new and exciting technologies, football fans will have the unique chance to shift perspectives and watch the game through a whole new lens. Notably, witnessing the game through the eyes of one of the players might not only enhance the visual experience of the game, but also allow fans to switch roles. Could this be a chance to gain even more fans after the German Football Leave (DFL) announced in April that the Bundesliga will go back to normal with immediate effect?

The answer probably is yes – though it might have to be awaited how fans will react to the new technologies. It can hardly be denied that the German football culture has been associated with fandom, rivalry and a couple of extra beers. Prior to the pandemic ticket sales of the Bundesliga and the Bundesliga 2 amounted to €650 million (2018/19), however from 2020-21 this amount shrank with nothing more left than €35.5 million. Based on the ongoing pandemic and the chance for unprecedented changes, one way of starting up a business in the German football industry may thus be related to designing innovative ways to watch games online and offline and increase sales. Setting no limitations on entrepreneurs’ ideas and football fantasies, it could certainly be imagined that the future of football will thrive on virtual (VR) and augmented reality (AR). But VR and AR do not only have potential when it comes to broadening the scope of the football fan experience – VR and AR technologies could also scale up entertainment in other sports areas and training.

VR and AR are nothing new…in 1986, Kenneth J. Dunkley filed a patent for his 3-DVG glasses, which allowed cinema lovers to experience something new and in 2006 the Wii home video game console, which the Japanese video game designer Shigeru Miyamoto invented, became for sale through Nintendo. In the domain of German football, AR also has been gaining attention with the FC Bayern Munich having engaged the AR start-up Immersiv.io from Paris together with the Deutsche Telekom “to allow fans at halftime to play a mini-game using their favourite players, access fun facts and information, and more”. Such an experience might be topped with the next game between the 1.FC Köln and the AC Milan, but who knows. Find out about two AR technologies in the sports world below:

As LaSource, a Paris-based B2B agency writes, the “‘ARISE solution […] allows the fan to take control of his own game experience by clicking on his smartphone screen to display real time statistics (like instant speed, heatmap, duels…) directly on the field’”. Designed by Immersiv.io, ARISE makes it easy and exciting to follow football matches both from home or in German football stadiums, especially when the latter can get a little crowded and don’t always allow to keep an eye on all the players and their maneuvers at the same time. With ARISE also allowing fan interaction, it could certainly be interesting to critically observe how the usage of VR and AR technologies could lead to dealing with hooliganism or entitling it. ARISE is not a VR technology and supports fans to share moments of the match (i.e. through photos) with each other. However, what could also be interesting would be to witness a football game through a different lens with the scenery of the football pitch transforming itself into a more exciting landscape – which reflects the colours of the teams and sets the scene.

In a nutshell, Hawk Eye technology has been described as “a camera system which traces the ball’s trajectory during [a sports] game”. Hawk Eye technology has both been used in German football, but also in other sports worldwide such as tennis, cricket, volleyball and ice hockey. The British company Hawk-Eye Innovations, which was acquired by SONY Europe, offers such a solution, which it calls TRACK. The latter stands for “optical tracking & camera calibration technologies used for performance tracking, ball tracking, [and] tracking purposes”. Next to TRACK, Hawk-Eye Innovations also offers a SMART and INSIGHT solution. Whereas the first allows to clip and replay videos, the second allows, among others, for “real-time virtual skeletal replays” as we know them from the German Bundesliga. But what do you think will be next? Would you be interested as a fan to understand how the game had continued if a certain player would take your advice? If you had an option to freeze the game and pick one out of three options in a key moment? Maybe this would be a welcome tool by football lovers and strategists.

Certainly, the above technologies are just a start on the pathway towards a ‘digital sports experience’. Innovating sports through VR and AR could certainly also be interesting for still competitive, but less aggressive and more performative sports such as ice skating, ballroom dancing, gymnastics and synchronized swimming. Such sports, which contain a range of aesthetic elements, might particularly be more interesting to watch with a different background. Rather than spending a lot of money to transform competition venues into exciting architectural works, 3D technology could allow such competitions to also become light shows responsive to movements and noise such as applause…

Sportstech – A Domain With Future Potential?

Sportstech does certainly include VR and AR technologies, but it would be wrong to assume that this is all it has to offer. It might not be as profitable as other domains (i.e. fintech) at the current moment, but in 2021 $4,1 billion were spent on the fans and content sector with $3,8 billion flowing into sportstech businesses in the US. Only between January and September 2021, $8,3 billion were invested in sportstech globally, whereby digital and connected fitness, sport NFTs, and betting and fantasy sports constituted the most attractive domains for funding. While most funding was obtained by companies who were located in the US, Germany ranked 7th with regard to gained investments, which however dropped in 2021 in comparison to the mean value between 2017-2021, which decreased from $534,9 million to $221 million. As the Global Sportstech VC Report 2021, which was established by SportstechX and Signa Sports United further reveals, sportstech is a broad domain targeting different clients – athletes, fans and executives. Software solutions for tracking and analytics, recovery and injury prevention, fan engagement, streaming platforms and league and event management may all shape the experience of sports in our increasingly digital world.

And this may hint that start-ups in the domain of sportstech could be particularly successful, where technologies aim to compensate for any losses made during the COVID-19 pandemic. Whether they make sure that sports clubs get a better handle on their finances or design an attractive solution, which allows fans to watch matches from their homes, including in the case of another lockdown, solutions in the domain of sportstech have to understand that – entertainment is a business of scale, but also a business for everyone. Designing solutions, which can hardly be afforded by fans, might be interesting but not the most profitable amid recent times. As the above data showed, digital and connected fitness marked one of the areas of major profit during the pandemic. In 2021, paid fitness, meditation and nutrition apps created a total revenue of $630,70 million with the first being the most popular among customers.

Combining the benefits of all three kinds of apps with a VR or AR experience could certainly make it more interesting to motivate those to sports, who would normally rather opt for gaming. One of the most up-to-date apps, which already combines fitness and meditation with VR is Supernatural. However, Supernatural is both quite expensive considering the cost of the VR glasses and the effect of playing such games on personal behaviours might have to be further studied. What Supernatural offers instead is to fight barriers with swords and completely sink into a fantasy world. As it states, “[f]rom the Galápagos to the Great Wall”, Supernatural certainly enables and exciting visual experience and travel. Arguably, VR/AR-based sportstech does not have to be focused on excitement only. Imagine you could put yourself in the role of your best self – create and design this role and get closer with every training you undertake. Imagine you could interact with your avatar to tell them your emotions and how you want to be motivated.

Right – if one thing is true then sportstech goes beyond sports only. Whether it is sport club management, health, finance – sportstech interferes with other domains and it would make sense for start-ups to pick a second domain, which is more profitable and also rich in terms of potential investors. That is also to say, although Germany could be called a ‘football nation’, it might not be the most profitable to design a technology which is applicable in one sports domain alone. Scalable solutions matter both outside the field of sportstech and in it. If you are playing with the thought to put your passion for software and sports into practise, maybe think a little further. Do you want to focus on contributing the most innovative technology and work together with companies who are already pioneering this area (i.e. SONY, Oculus VR, Samsung, Microsoft etc.) or do you prefer to design customer-friendly solutions for everyone utilizing sportstech as a tool for a broader mission (i.e. health, stress management, finance management).

Are you a start-up with an interest in the sportstech domain? Then our team will happily provide you with support on the legal side! We are both specialized in supporting multicultural businesses in Germany and in supporting German businesses across various African jurisdictions. While our support starts with providing help on immigration and relocation matters, it does not stop there – taxes, tech, intellectual property…You heard us! If you want to find out more, contact us today and we will happily answer all your questions!

Increasing The Representation Of Black-Owned Businesses In South Africa
August 8, 2022

Representation Matters – Including In The World Of Black Fashion
August 2, 2022

Showcasing The Work Of Black Entrepreneurs In Germany
August 1, 2022