African Entrepreneurs on the Pathway to the EU: 3 Reasons Why the EU Needs to More Effectively Support African Potential 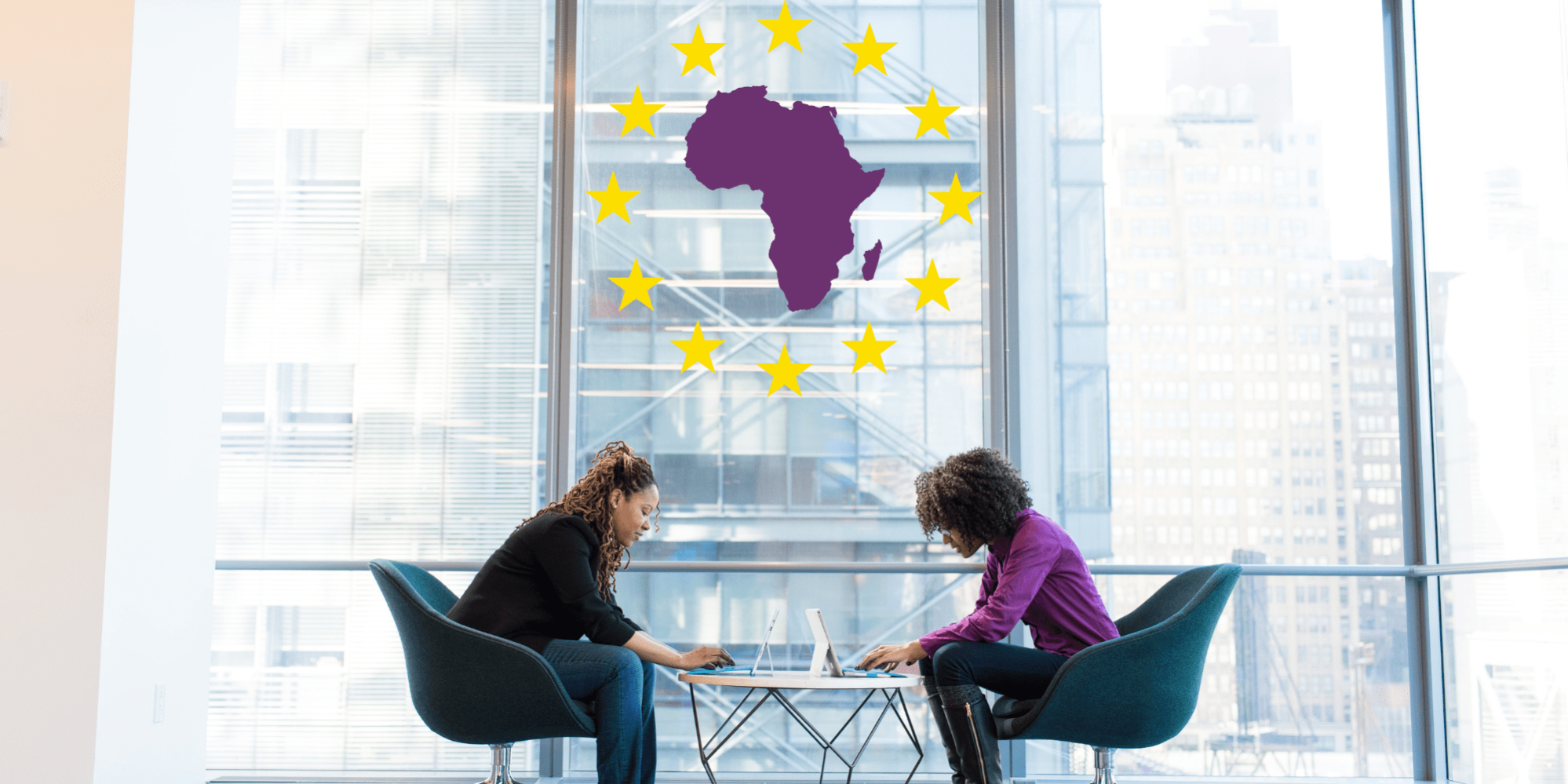 The most recent events such as the European Union (EU) – African Union (AU) Summit and the EU-Africa Business Forum 2022 have underlined that it is an exciting time for entrepreneurs both in Africa and in Europe. As the EU and countries such as Germany are planning to more thoroughly support Africa with regard to a variety of developmental projects, which are among others linked with decent job creation as well as investments in education and training, African start-ups are achieving new record highs in terms of earnings and yet, entrepreneurship still constitutes a somewhat precarious labour compared to formal labour. This article will provide a few insights into entrepreneurship in Africa – arguing that African entrepreneurs should very well be supported to scale-up in the EU for a variety of reasons.

Ahead of the EU-AU Summit, Werner Hoyer, the President of the European Investment Bank (EIB), announced that supporting “African start-ups, entrepreneurs, smallholders and businesses” is a top priority. As Hoyer continued, making sure that the latter actors “can harness new opportunities, create jobs and expand is essential for Africa, Europe and the world”. Not only will Africa play an important role in the renewable energy industry, but also could African youth be seen as a catalyzer for innovation in Africa and beyond. As Dvouletý and Orel reveal in their 2019 article ‘Entrepreneurial Activity and Its Determinants: Findings from African Developing Countries’, Africa’s entrepreneurship rate approximately balanced at 31,4% between 2001-2016, whereas the overall entrepreneurship rate in Europe leveled off at around 15%. African entrepreneurs are active and they do not shy away from taking initiative. Read on for more reasons to support African entrepreneurs with starting up a business or scaling up their business in the EU below!

The median age in Europe is approximately 42,5 years, whereas the median age in Africa lies at around 19,7 years. Especially because Africa’s population is projected to drastically grow until 2050, the future of innovation probably lies in Africa. To this date, Europe’s population makes up for 9,78% of the world population, while Africa’s population makes up for 16,72% with the continent also being home to the second-biggest population worldwide next to Asia, which scores on rank 1 with a 2020 population of around 4,641,054,775. As summed up by Edward Paice in an article in The Guardian, “[b]y 2050, a quarter of the world’s people will be African” – which is just at around the same time as Asia’s population is projected to start declining. Whereas the latter might bring about great changes, a further significant difference in relation with age and entrepreneurship is that African entrepreneurs tendentially learn how to do business at an earlier age.

In the member states of the EU, the share of self-employment for the age category 15-29 lay on average at 6,5% in 2015, whereby it was lower in wealthier countries such as Austria (a little more than 3%), Luxembourg (a little more than 3%), Germany (a little less than 3%) and Denmark (around 2,5%) and higher in countries such as Greece (16%), Italy (around 15,5%), Slovakia (around 11%) and Romania (10%). Thereby, the average age of male and female founders lay at 38 in 2020 as findings from the European Start-up Monitor 2019/2020 suggest. According to Arun Sharma, the median age of entrepreneurs in Africa lay at 31 in 2017. Furthermore, Egypt has particularly high Total early-stage Entrepreneurial Activity (TEA) rates for the age categories 18-24 and 25-34 in comparison to estimates for other age categories. Whereas the age category 25-34 is even more present in South Africa (around 12,5%) and Morocco (slightly higher than 15%), these countries also show more TEA among higher age categories.

According to a 2015 report by the International Development Research Centre (IDRC), female entrepreneurs from Sub-Saharan Africa in the age category 18-34 had a slightly higher share in early stage entrepreneurial ventures than their male counterparts. Whereas they had more low-growth potential, they also witnessed less medium- and high-growth potential. As various sources indicate, African women are actually prepared to start up businesses with a continent-wide reach, but currently a large share of them have been “engag[ing] in low paying activities” differently than male entrepreneurs. During the COVID-19 pandemic, female entrepreneurs have also been more heavily impacted by high revenue losses (i.e. more than 50%) having had lower access to alternative sources of additional financial support. As the International Finance Cooperation (IFC) explains, losses were, among others, linked with the fact that female-led businesses in Sub-Saharan Africa tend to be smaller, more informal and focusing on rather negatively affected sectors.

The latter should be an incentive to support them, especially because Africa “leads the world in terms of numbers of women business owners”. As Sustainable Development News (iD4D) suggests, the latter might rather be linked with the fact that women do not find solid other opportunities (i.e. in the formal sector) – which is an additional reason to support them in scaling up their businesses and supporting other women through employment and training opportunities. This being said, another issue that demands for a solution is the fact that going back from informal employment (i.e. entrepreneurship) to formal employment can be difficult. In other words, what might be interesting to strategize about, is how private-public and interregional partnerships could address these gaps, for instance, by creating a stronger bond between African start-ups and international businesses and organizations in Africa and in Europe.

Currently, African European Entrepreneurs already is a platform, where African and European entrepreneurs can meet “without travel”. Whereas the platform allows streaming for several sessions about SMEs in Africa and the EU – the question is how accessible it is to female small-scale entrepreneurs including in rural areas. With quite some women setting up a business with less technical skills than men, it might indeed be important to not cater solutions to already successful businesses, but more strongly work on creating a sustainable and well-connected infrastructure for small-scale entrepreneurs and supporting a few promising SMEs to scale up, train and employ women.

Announcements are spilling over…After the 6th EU-AU Summit took place from 17th-18th February in Brussels, it is certain that the EU wants to invest in Africa. The Global Gateway Africa – Europe Investment Package is aimed at both, accelerating: 1) the green transition, 2) the digital transition, 3) sustainable growth and decent job creation, 4) the quality and efficiency of healthcare systems, and 5) transformations in education and training. Holding ready €150 billion in investments overall, the EU has emphasized that “[t]he Team Europe Initiative on Youth Mobility for Africa will promote youth exchanges and mobility in Africa and between Africa and Europe”. While the latter will be closely connected with efforts to scale up the Erasmus+ programme, scholarships and internships, the Women Entrepreneurship for Africa (WE4A) programme will work towards supporting women entrepreneurs in Africa.

Whereas the latter is urgently needed, as indicated above, a stronger integration between entrepreneurship support initiatives and educational support initiatives must take place in order to address the struggles, which female entrepreneurs and workers face in Sub-Saharan Africa. Local development arguably starts with working on each and every single livelihood  – which means that partnerships need to target systemic change at various societal levels. To illustrate, a stronger integration between education, entrepreneurship and exchange could also lead to increasing the presence of African-led businesses in the EU, which would probably accelerate a knowledge exchange between the latter regions with benefits for both. Supporting African entrepreneurs with scaling up their businesses in the EU more directly would not only constitute an opportunity for the EU’s SMEs to become more innovative through cooperation and grow in line with the time spirit of the upcoming decades, but it may also lead to addressing gaps in EU migration policy.

Both internships and the Erasmus+ programme usually have a limited time frame – they do not constitute opportunities to build up long-term business relationships except in individual cases based on merit. In addition, they rather constitute opportunities based on ‘precarious prosperity’ – a concept, which is usually used differently – namely in the domain of labour – and was coined by Hübinger in 1996 as Camfield and Monteith explain. According to the latter authors, the term precarious prosperity makes it possible to draw a line where “prosperity is ‘secure’ and life contingencies are not usually followed by impoverishment”. The argument here is that exchange programmes with a limited time frame are not enough unless they are directly linked with future opportunities – for instance, because they provide certificates and experience useful in contributing to the EU-African business scene later.

In order to build long-term relationships between Africa and the EU, including in the domain of entrepreneurship, it needs to be worked on further detaching mobility from temporary exchanges, respectively ‘precarious mobility’. The latter is not to say that short-term programmes do not have value, but – there need to be more direct ways to reconnect and give back to a country by starting up a business or scaling up in a previous ‘host country’. In addition, the above-mentioned knowledge exchange, if set into practice (i.e. within different industries) could also lead to accelerating development in both regions with regard to the most recent challenges of the upcoming decades.

Are you a founder from Africa with an interest to scale-up in the EU? Then our team will be very happy to support you with any questions you may have! We employ legal experts with knowledge across various African jurisdictions and have long-standing experience with giving advice on topics such as labour and immigration, tax and customs, contracts and negotiations, corporate governance and compliance as well as data protection. Next to our African offices, we have an office in Germany since 2020. Be invited to contact us for an initial consultation today!