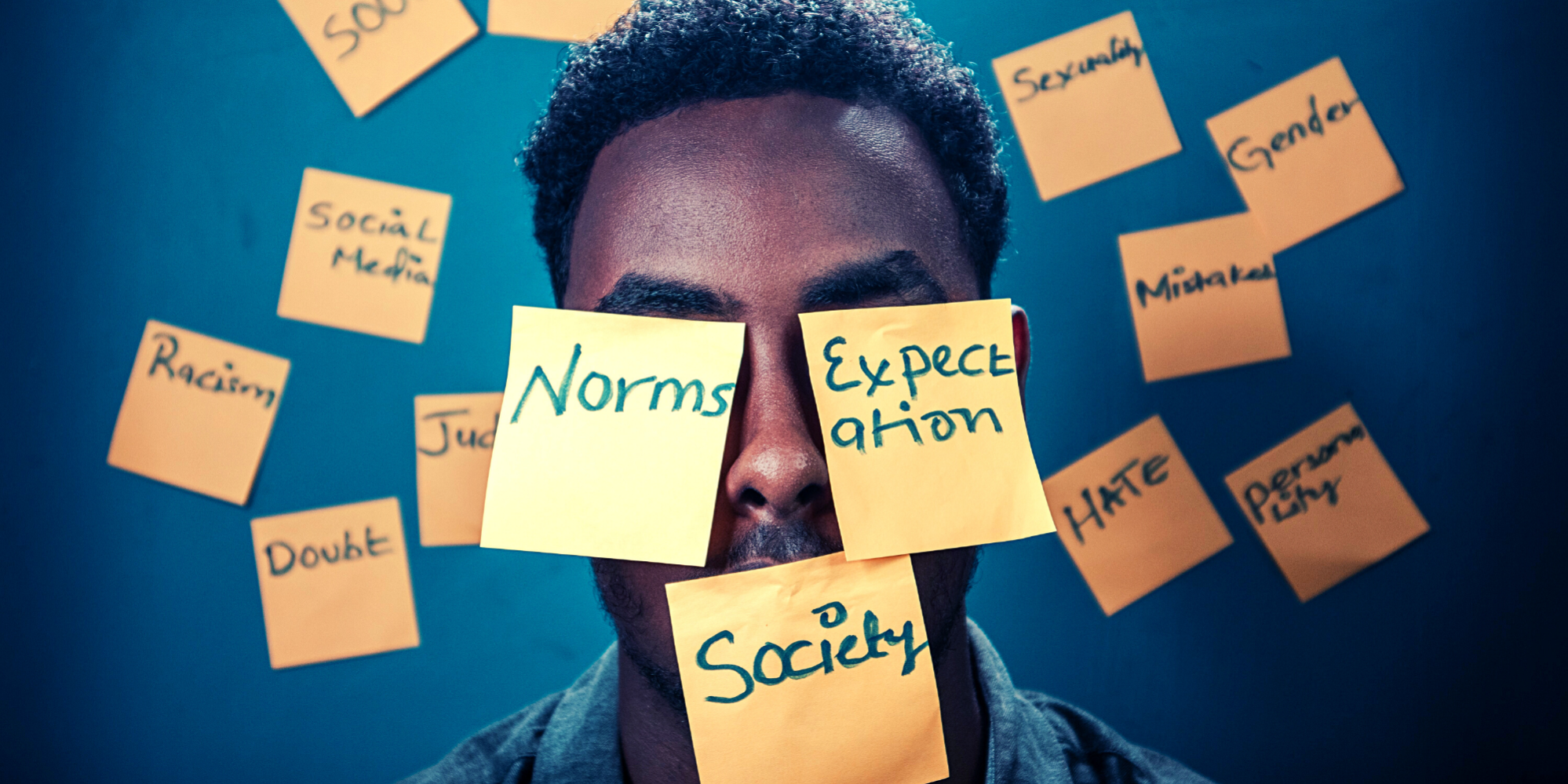 Migration can both be an exciting, difficult, joyful, unsafe, inspiring and draining experience. There is not one pathway, which is the same. Whereas some expats/migrants have already established connections in a new ‘home’ before leaving their country of origin or residence because their family relocated before they could join them, others might regard migration as a chance to restart at zero – alone, without any connections or confidence regarding their skills in a local language – and what do we call all of them? Brave! Well indeed, if there is one thing expats, migrants and nomads have in common, then it is possibly bravery!

So, if it takes courage to start somewhere new, then how do we express our feelings about our migrational journeys and how do we give all those little moments of doubt a voice – maybe, because we were the target of micro-aggression, were discriminated and feel excluded in a our new ‘home’, or because our journey just confronted us with so many emotions all at once? Well, one particular tool of self-expression and self-exploration is art. It is no secret that art has served individuals for centuries to express themselves. Whether it is music, painting, sculpture, poetry etc. art has the power to help us understand ourselves better and it also builds bridges between different groups – especially within the expat experience. This article will acknowledge the importance of art as a liberational tool and introduce Berlin’s black artists and their drill for entrepreneurship! Are you ready to get inspired? Read on below…

“I ran away from the war that you are all aware of. Protect me as a teenager that landed in your place. This is only a temporary stop until my next destination. It’s just a few days, bear with me.

You run from the rain, to the nearest dry spot, and the police will come and kick you. We are not thieves nor looters, nor people with weapons. Nobody ever heard of a criminal act by a Sudanese guy” (‘ABBAS’ – Family Business VEVO, Zeyo)

Zeyo is short for Mustafa Elsiddig – a Sudanese citizen, songwriter, rapper and filmmaker, who grew up in the United Arab Emirates and currently lives in Berlin, Germany. Zeyo is a fellow at Oyoun – Kultur NeuDenken (‘Rethinking Culture New’), which describes itself as a space for “for critical discussion, reflective experimentation and radical solidarity” and says that it “conceives, develops and implements artistic-cultural projects through decolonial, queer * feminist and migrant perspectives”. With his music, Zeyo does not only intend to express his own challenges and the injustices, which he witnessed, but also the injustices which have affected others. As he said to Oyoun, he wants to speak up on the impacts from the “repression of freedom by the extreme right” and support artists at home, who “are suffering from the harsh living conditions they are going through because of the government, not fortunate enough to practice their art”.

This aim together with Zeyo’s engagement with children and young musicians shows that (the practice of making) art indeed is a tool to claim back the fundamental right of freedom of opinion and expression. Indeed, the practice of art can be courageous in a world – where even speaking up on societal issues can lead to facing threats. The latter shows that ‘host countries’ have a moral and practical obligation to provide for a space, which did not exist in a ‘home country/country of former residence’ – legally speaking, at least as long as they have committed to protecting this right by signing the European Convention on Human Rights (ECHR), which countries such as France and Germany have ratified in the 1950s-1970s. As Macron won France’s elections in April 2022 with 58,5% against Marine Le Pen with 41,5%, Zeyo had just published the new trailer of ‘ABBAS’ – that starts with the above-mentioned lines and shows that police and state violence is both related to the reluctance to provide for an environment, which assures that fundamental rights of migrants can be met, and  more active forms of physical violence including subtler forms of aggression such as intimidation.

With the movie having been showcased at Oyoun and MOOS in May 2022, it certainly is the time to watch it now and share Zeyo’s work, discuss and celebrate his courage! In 2022, it can no longer be assumed and promoted that migrational governance is about a one-dimensional form of ‘integration’. What ‘integration’ is – is actually connected with the obligation of creating a space, where an encounter of different cultures can take place. It is through these encounters, may they be facilitated through art or other ways of community-building and exchange, that ‘integration’ takes place. It means – finding your place in the puzzle, not shaping yourself into someone you are not!  And the puzzle is big! Indeed, in a time where the word and concept of a  ‘patchwork family’ has commonly been accepted, it is time to talk about ‘patchwork societies’. If you’re curious about music, do not fail to let yourself get inspired by something new – Zeyo certainly has a lot to offer – even to those, who do not understand everything that he raps! If there was only one more thing to wish for, it indeed would be that African musicians receive more support so their messages do not get lost! Listen to روحي لسة هناك (‘My soul is still there’) and ياهم on Zeyo’s YouTube channel!

SİNEMA TRANSTOPIA: “[C]inema as an important public sphere of sociality“

“How can a new kind of cinema be collectively created within a transnational society? SİNEMA TRANSTOPIA, the cinema-experiment by bi’bak, explores cinema as a space of social discourse, exchange, and solidarity.

The curated film series brings together diverse social communities and connects places both near and geographically distant; it links pasts, presents and futures and moves away from a eurocentric gaze towards transnational, (post-)migrant and postcolonial perspectives”

Are you passionate about cinema yet? If not, then SİNEMA TRANSTOPIA might succeed in convincing you that watching movies is indeed not a passive activity, which proves that the old 21st Century version of capitalism has reached its limits in a while. Bi’bak is Turkish and means as much as ‘have a look’. It is also the name of a Berlin-based non-profit organization, which was founded in 2014 by Malve Lippmann and Can Sungu. Despite that Bi’bak is not an African-led organization, it puts a strong emphasis on cultural exchange, postcoloniality and anything beyond the ‘Eurocentric Gaze’ as the quote above shows! And the ‘Fiktionsbescheinigung. 16 Cinematic Perspectives on Germany’ project from 2021 at SİNEMA TRANSTOPIA, was established with help of Enoka Ayemba, who is “a film curator and film critic focusing on African cinematographies, the Nigerian video industry and anti-colonial movements”.

Julien Enoka Ayemba studied economics and marketing at the University of Douala and works and lives in Berlin. As a member of the “anti-colonial film group Remember Resistance”, Enoka Ayemba actively engages himself for the fight against repression and racism. His work was showcased, among others, as part of the event series ‘Re/Visionen: afrikanische Perspektiven zeitgenössischer Kunst’ (‘Re/Visions: African Perspectives of Contemporary Art’), which was organized in 2009 by AfricAvenir International, which describes itself as “a pan-africanist non-governmental and non-profit organisation founded in Cameroon” and emphasizes that its purpose is to foster political dialogue and knowledge about Cameroon in Africa and across the globe. Having an office in Berlin, AfricAvenir International has gained attention by the media, when the Tangue – an art piece that was stolen from Cameroon, reappeared in Munich in 2020. As an article on Deutschlandfunk emphasizes, “it is not just about the art”. Undoing the colonial damage that Germany has done in Cameroon also means to look out for and give back cultural treasures to Cameroon. The fact that many of such treasures are still displaced in Germany proves that art is indeed acknowledged as a form of cultural exchange and that there is an openness towards exchanging art – even if there might also be a hostility towards expats/migrants.

Do you want to rewrite the story of black artists or artists with African descent in Berlin or another German city? Then reach out to us with your business idea! Our team is not only specialized across various African jurisdictions, but also in supporting businesses between Germany and Africa in a variety of legal domains. Our support starts with providing help on immigration and relocation matters, but it does not stop there – taxes, tech, intellectual property…You heard us! Find out more about potential synergies today by pitching us your business or expansion idea/plan – we cannot wait to hear from you!