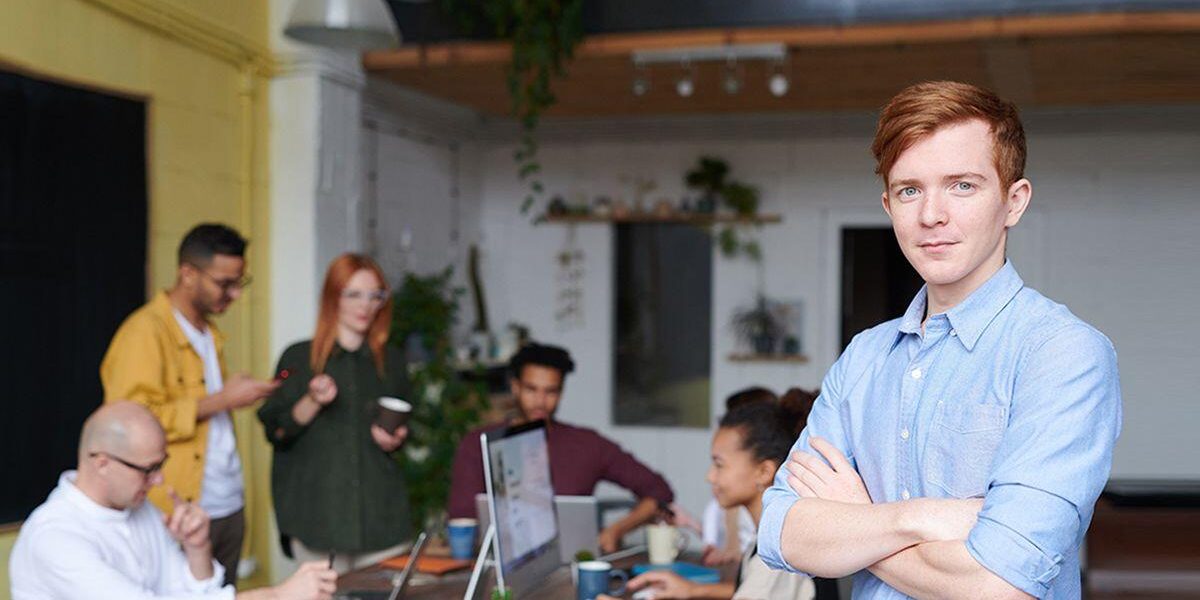 What does the term start-up mean?

A start-up is a young company with an innovative and scalable business idea that has been on the market for less than 10 years. Start-ups are digital, fast-growing and sustainable. Compared to established companies, they are able to adapt to market changes flexibly and quickly due to their short decision-making processes.

According to the state-owned development bank KfW, the number of newly founded businesses in Germany has risen to 605,000 in 2019. Compared to 2015, this represents an increase of nearly 15%. Just under a third of all start-ups belong to the digital field. Even though many young companies were hit hard by Covid-19, many young entrepreneurs hope to benefit in the long term from the digitalisation push triggered by the pandemic.

Companies from the information and communications technology industry make up the largest share of the start-up sector with just under 32%, followed by consumer goods (11%), medical and healthcare products (9%) and the logistics and automotive industry with 6%.

With regard to the products of the start-ups, business-to-business solutions account for the largest share of sales, followed by products for private customers. Business relationships with public authorities account for just under 4% of total sales of German start-ups.

According to the start-up monitor 2019, published by the consultancy firm PwC in cooperation with the Federal Association of German Start-ups, the sector is developing into the job engine of the German economy. On average, almost 16 employees are working at a start-up, slightly more than last year. In the Berlin and Munich start-up centers, the average size of the teams is already over 30 people. In addition, the majority of young companies are planning to hire eight more employees in the upcoming year. In recent years, the port city of Hamburg has made a name for itself above all as a location for start-ups in the field of social impact and in the logistics industry.

International influence on the start-up scene

All in all, it can be said that almost 85% of the sales of German start-ups are made in the domestic market. Young companies that additionally operate on a global scale tend to focus mainly on European business. If you look at larger start-ups, one can see that the share of sales abroad is higher compared to smaller start-ups.

However, in regard to their employees, 96% of all German start-ups with more than 20 employees have an international staff. Moreover, 39% of these companies employ people from outside of Europe. Start-ups stand for internationality and cross-border exchange. Therefore, English is the common working language in many startups. Especially technology-oriented startups would not be able to advance developments in the field of artificial intelligence or blockchain, for example, without experts from abroad as Germany has been lacking thousands of IT specialists for years. As a result, German start-ups are offering high salaries and a variety of benefits to attract foreign developers. Nowadays, almost 50% of all developers, who work in the start-up scene, are therefore non-germans.

To conclude, in 2019, 26% of all founders in Germany are from abroad, which is a 5% increase from 2018. Economic experts predict that the innovative spirit and growth orientation of immigrants hold great opportunities for the future of the German start-up scene.

The capital Berlin remains the center of the German start-up ecosystem. Between 60 and 75% of the venture capital invested in Germany is invested in start-ups located in Berlin. Since the turn of the millennium, the digital sector in particular, with e-commerce companies and software-as-a-service (SaaS) solutions, has contributed significantly to Berlin’s economy.

The German capital scores points above all with its good connections to the public sector and numerous incubators, accelerators, co-working places and networking events. Many large companies such as Deutsche Telekom recognize the advantages of the location and establish corporate labs and hubs, thereby securing additional jobs. Another advantage of Berlin as a location for start-ups is the relatively low cost of living and rent compared to other European capitals such as London. Furthermore, Berlin offers a competitive trade tax rate of around 14% compared to other German cities like Frankfurt (16%) or Munich (17%).

Berlin is also known for its cultural openness and diversity. Many young start-ups benefit from the city’s multicultural orientation, especially when looking for qualified personnel from abroad. As a result, more than a third of the founders in Berlin (35%) hope that politicians will simplify the immigration law for skilled workers from abroad to attract international talent for their start-ups. Notably, of all start-up founders in Germany, 1 in 5 also has a multicultural background.

The start-up ecosystem in Munich

Next to Berlin, Munich also impresses in a Germany-wide comparison as a start-up and innovation center. The Bavarian capital is considered Germany’s No. 1 insurance location. Moreover, major companies of the IT-industry in particular as well as research and knowledge-intensive sectors such as life sciences, medical and environmental technologies are also based in Munich. Another location advantage for founders is the innovative, technology-focused degree programs offered by the universities of TU Munich and Ludwig-Maximilians-Universität, which, according to a PwC study from 2019, has the highest number of founders among their students in a Germany-wide comparison.

Once a year, the German and international start-up scene meets in Munich for the world-renowned Bits & Pretzels conference. Recent speakers have included Barack Obama and the founders of Airbnb, Tinder and Evernote.

Starting in 2021, Munich Urban Colab MUC, a new innovation center in the northwest of the city center, will open its doors. On around 11,000 m², up to 250 startups can collaborate on topics such as mobility, living and working, and energy supply, and develop solutions for the city of the future (smart city).

Founders are on average 35 years old and have a university degree. However, many of them criticize that the German education system does not promote start-up skills such as creativity, flexibility and courage. As a result, many schools and universities now offer innovative entrepreneurship courses and support the exchange between established companies and start-ups. Many young companies are being established in close collaboration with renowned universities. There, entrepreneurs gain access to business incubators and practice-oriented research facilities. The young companies also hope that this locational advantage will give them access to highly qualified talent and the technological infrastructure to succeed.

The proportion of female founders in Germany is alarmingly low. According to a study by the Boston Consulting Group, only 4% of all young companies in Germany have an all-female team of founders, 10% of the start-ups are mixed, and in 86% of the companies, the founders are all male.

Many founders are committed to making a positive contribution to the environment and society. As such, their business model often incorporates ways to be sustainable and give back to the community.

Decisive success factors for start-ups are above all the scalability of their business models and access to external capital. Particularly with regard to financing, founders hope to reduce bureaucratic hurdles and regulations in the future. Without additional support, the growth of young companies is difficult to achieve. Capital is needed especially for personnel expansion, the development of new products and the optimization of existing ones. Although the average capital investment has grown in recent years, there is still a need for improvement in this field. Only 15% of all start-ups have successfully raised venture capital so far, and most founders would like more support from VC and business angels in the future.

Compared to recent years, German start-ups were able to raise more debt capital in 2019. Overall, the 100 largest German tech start-ups have received 11 billion US dollars from investors since their foundation. Notably, 63 of the 100 tech start-ups with the highest total financing were founded in the start-up hub Berlin. In a study, the management consultancy Ernst & Young states that most of the venture capital went to FinTechs and mobility start-ups, followed by software and analytics.

The German government wants to further support the financing of startups in the future. Therefore, German State Secretary of Finance Jörg Kukies announced on Nov. 27, 2020, that the German parliament has approved a “Participation Fund for Future Technologies” investing a total of €10 billion venture capital between next year and 2030 to support the expansion of German startups.

The nationwide most prominent contact for the allocation of public subsidies is the state development bank KfW, which additionally, offers several start-up loans.

The High-Tech Gründerfonds (HTGF) is a public-private venture capital investor based in Bonn, Germany, which is funded by the Federal Ministry of Economics and Energy (BMWi), the state development bank KfW and private companies. The fund invests in technology start-ups that can implement promising research results in an entrepreneurial manner. In addition to the equity capital, the fund supports the founders with know-how and a strong industry network.

The German Accelerator is operated by German Entrepreneurship GmbH and supported by the Federal Ministry of Economics and Energy. A team of successful entrepreneurs, investors and start-up experts accompany promising German startups through their international expansion. At the innovation locations Silicon Valley, New York, Boston and Singapore, participants in the Accelerator Program receive free office space, direct access to a global network of investors and coaching services from industry experts.

The Federal Association of German Start-ups acts as a lobbyist vis-à-vis politics, business and the public and offers founders a network and events for exchange. In addition, the association participates in current discussions and expresses its views on draft laws and strategies of the Federal Government.

The business start-up portal of the Federal Ministry of Economics and Energy offers young entrepreneurs information on financing, event tips and support with their business plan.

From the choice of legal form, copyright, trademark and labor law issues, questions about intellectual property rights or licenses, assistance with entry in the commercial register and chamber duty, as well as advice on equity investments and partnerships of start-ups – in the founding process and afterwards, entrepreneurs need legal support.

Contact Centurion Plus Germany today for an initial consultation on all legal issues relating to the founding of a company.

To find out more about other booming sectors of the German economy, have a look at our series of articles about German industries, for example, here you can find an overview of the technology sector and general investment factors for Germany as a business location.